Scenes from a small town

I'm too tired to be brilliant or witty today. That's not to say I am any other day, but I'm still feeling the aftereffects of my enforced evaca-vation. What's an "evaca-vation" you ask? A local DJ coined the term. It describes the combination evacuation those in the path of Rita were required to make, and the mini-family-vacation it became for many of us who escaped Rita's path. A lot of folks spent unexpected time with their families over the several days we were evacuating, including myself. The kids got a lot of our undivided attention, and we drove through some parts of Texas that were quaint and charming that we might never have had the chance to see otherwise.

We even stopped in a small town where my husband's ancestors were born, saw the church in

which his father grew up, and took pictures of the gravesite where his grandparents were buried.

This town even had a pretty spiffy monument to General Douglas MacArthur. We didn't get to go in, but I had to take his picture.

Some of the towns we saw looked as if time had passed them right on by, leaving behind nothing but flaking paint and rusted memories. 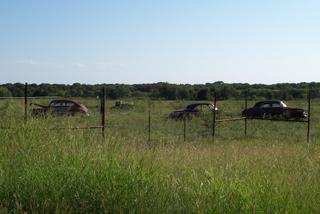 We even passed through the "goat meat capital of the world," Zephyr, where I took these shots of abandoned cars from circa 1940's. 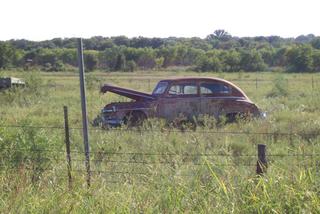 They reminded me of the pictures I'd taken years before as a child, standing on the Berlin Wall, overlooking the bombed out Potsdam Plaza, which had been blown up during World War II and abandoned until the wall came down fifty years later. Cars just like these littered the streets, crushed and broken apartment buildings gaping open-mouthed at the evidence of violence around them. The memory I have of that place was one of a frozen moment, caught in an elliptical loop, forever playing forwards and backwards. These scenes in Central Texas were more bucollic, but gave me that same sense of time trapped in amber.

I didn't even know places like this still existed in the good ole US of A. Learn something new every day.