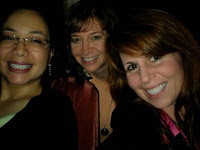 Well, I’m finally coming down from my post-conference high. I was visiting San Francisco last week for the Romance Writers of America’s annual conference. I met up with old friends (that's me and my great pals D'Anne Avner and Trish Albright, looking like frowsy but fabulous rock stars coming home from an all-night party), made some new ones (hey, I even chatted up Debra Dixon and Linda Howard), and generally had a good time. I will say that the highlight of the conference for me was actually the events that took place before the conference.

The Beau Monde Society and the Hearts through History chapters hosted a Historical Romance Writers conference a day before the real conference started. I enjoyed myself, and will talk about it more over on the PASIC 2B Read blog on Friday, 8 Aug 2008. Go check it out!

I enjoyed the heck out of the Victorian Dress workshop I attended during one of the several sessions offered at the historical conference. Watching these ladies get dressed (yep, they were in their knickers when I showed up a few minutes late to the session) really helped me to understand what a ritual it was just to put on clothes—and take them off—in Victorian times. 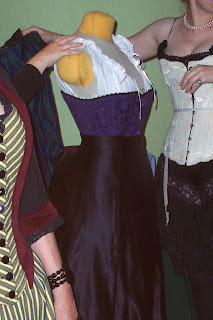 I now know that if a gentleman and lady wanted to engage in—how shall we say—a rapid moment of intimacy, there would be no way he’d remove her clothing first. It would have taken an hour just to get her back into them, if he even knew how. 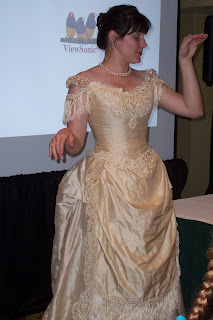 The lady’s under things were constructed in such a way as to make her, ahem, biologically necessary procedures easy to take care of without removing any of her clothes, and thus the clothing would have stayed on, even though the skirts would have gone up. :-) These particular styles were from the later half of the 19th century, so the half-bustle was in vogue, as shown in the image to the right. 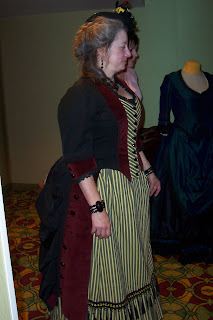 This is a dress a woman of lower means might have worn, probably a servant or one not of the upper classes, and therefore the dress was more practical and of servicable material. Notice also that her dress buttons in front, which means she had to get herself dressed without the assistance of a servant, unlike the lady of means.

The heroine in my current work-in-progress, a Victorian-set novel, is from an earlier period and would be wearing the rather unattractive wide-skirted crinoline, which resembled an upside down bell and dangled from a “cage” around the woman’s waist. It could make high winds and sitting down without showing your underwear a bit of a challenge.

Author and historical costume diva Kalen Hughes (Lord Scandal) led the group the next day to the Lacis lace museum in Berkeley, where we discovered everything from mourning clothes to menswear 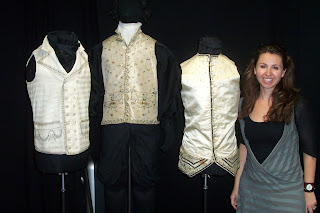 (that’s the stunning Delilah Marvelle, author of Mistress of Pleasure, beside the waistcoats), and I spent way too much money on research books. The museum’s curator explained that even when clothing moved to being machine and factory made, it was still beautiful. 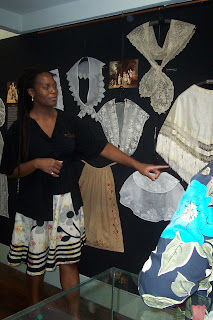 I also signed books at the Literacy Signing, a first for me. This is an annual event RWA hosts prior to the official opening of the conference. So far, RWA has raised over half-a-million dollars for literacy. All the books are donated by publishers, authors sign them for free, and readers come in droves to meet their favorite authors in person. I have some great photos of friends and fellow authors posted over on my gallery at my website as well. Hope you’ll stop in and check it out!

I swear, I didn't forget. However, life has been very hectic this past month, with three different trips to the West Coast for me.

However, I am happy to announce that Kay Hudson of Houston, TX is the winner of June/July's contest. I'll get in touch with Kay and get her the two fabulous books.