Thanks for discussing LOST with me, folks. I've picked the winners of the two Amazon.com $10 gift certificates. Please contact me via my e-mail at tjb(at)tjbennett(dot)com and let me know if you would like yours sent electronically or via the mail (and I'll need your appropriate contact info either way). The winners are:

For those of you who didn't win, stay tuned. I just received a box of six beautiful new romance releases from Hatchette Books, and who knows, I might be tempted to share them with you. Loverly, eh?

Last thoughts on LOST and storytelling 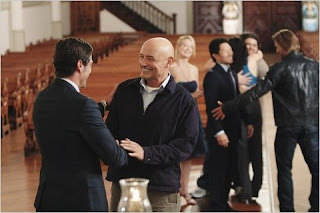 Okay, so if you haven't seen the finale of LOST yet, do not read any further. There WILL BE SPOILERS ahead.

Don't say I didn't warn ya.

So, why not add my thoughts to the gazillions already trending on Twitter and the webverse? Everybody with a blog has an opinion, so here is mine.

I don't know what I think. Yet. And that is the beauty of LOST, both in its final episode, "The End," and in the series itself. LOST has given us the kind of storytelling that is the ultimate of interactive TV: it made us think. How many series can you say that about? Not many.

It made us talk. It made us gather in groups and debate philosophy, and time travel, and physics, and good vs. evil, and and... It drove us to the Internet in search of others who had to know. It divided and conquered and united and rose above. Sometimes it soared, and sometimes it stumbled mightily, reaching out its hand to stretch for the brass ring, and having fallen, still arose with that ring clutched in its fingers.

It was epic. And now it is over, and I must admit it: I feel a little bit LOST myself.

I'm a storyteller at heart, and this was storytelling at its best. When it all comes down to it, isn't that what being part of the community of humans is all about? From the days of the caveman sitting around a flickering fire, relating the hunting tales of the day to the hushed and gathering crowd, to the present day, we all still enjoy a great story, well-told, with plenty of action, food for thought, and memorable characters, and that's what LOST gave us.

So my thoughts on exactly what happened in the finale? I'm still digesting, as I said. I haven't figured out if I liked the end, because I haven't figured out if I understand the end. I can honestly say, however, I've never watched a television show that made me toss and turn at night and wonder, "What does it all mean?" I've read books that have done that, sure, but the idiot "boob tube"? Never.

And of course, those who said the island was a kind of purgatory were sort of right, but I think the purgatory was the place they had all created to find each other, not the island itself. Until they did, they couldn't find each other--so they were, in fact, waiting, which is what purgatory is all about: it's not Hell, but a place to wait while one, as Ben Linus put it, "works some things out."

Which is why, I suppose, Ben didn't move on with the rest. He had a lot of things to work out still, to put it mildly, and even though he was the island's villain, he was so well-motivated most of the time that we still rooted for him to have his happy ending. Or at least the possibility of one.

I was a bit bewildered that Sayid's sideways character's true love was not his wife, Nadia, but Shannon. Frankly, the fact that Sayid sold his soul to the MIB to be with his wife again would have made me think otherwise.

And I think some mixed messages were sent as a nod to political correctness with "Christian Shepard" ("Seriously?" Kate asked about the name) standing in a church in front of a stained glass window which ecumenically touted the religions of the world behind him while telling Jack he was dead. I know the producers probably didn't want to offend by trying to say any particular version of what happens after people go into "the light" is the only one, but it seemed a bit pat, a jarring note that reminded me of the end of BOOK OF ELI, another story that made me think and which I loved.

Still, nothing was so moving to me as seeing Sawyer and Juliet together again. The moment when he held her and said, "I got you, baby," made sitting through an entire season without her worth it. I loved Juliet, and felt her absence keenly throughout the season, both hers and Desmond's Penny. I wish we had gotten to spend more time with them.

So, anyway, those are some of my thoughts. If you have any, feel free to comment below. I'd like to hear your take. Did you like the finale? Hate it? Feeling ambivalent? Or, just feeling LOST, like me? And if you made it this far, I'll give away two $10 gift certificates to Amazon.com to two people who comment on this post by 5/27/10.

Email ThisBlogThis!Share to TwitterShare to FacebookShare to Pinterest
Labels: LOST