This post has nothing whatsoever to do with Tropical Depression Ingrid, formerly a tropical storm. However, in my Google alert delivered daily into my inbox, this was one of the headlines (snipped by the alert feed), and I'm in a weird mood, and I got this image in my head of a six-foot Norwegian girl beset by mood swings, her hand pressed to her forehead while she engaged in a dramatic swoon. That her emotional condition is being reported in news feeds is no doubt one of the reasons her mood is fading to depression.

Like I said, I'm in a weird mood. This might have been brought on by the other incident today. The screaming pig incident. Let me explain.

My boys won their second football game today (they’re 2-0 now). This was an “away” game; we had to drive to a rural area in East Texas, where I live. The school field we played on apparently shared resources with the local 4-H club. During the entire second and third quarters of the game, we had to 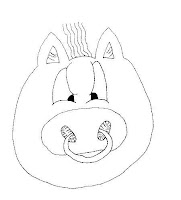 listen to a big pig screaming so loud, the kids could hardly hear the calls. I guess the pig needed shaving, and wasn’t too happy about the whole idea. I’ve heard pigs squeal before, but never scream like a demon from the depths of hell for thirty minutes. Of course, why the pig needed shaving in the first place was a mystery until my sister, intrigued by the whole concept when I called to tell her about it (she lives in Los Angeles), looked it up on the Internet. I guess it’s important that your pig be smooth when it goes forward to the 4-H show. And, it takes a couple of days to shave it, because, you know, the pig gets tired after a while and you have to stop.

Wow. Can’t buy atmosphere like that in Los Angeles, let me tell you. I wonder if this is how Thomas Harris got his idea for Silence of the Lambs.

My sister keeps telling me I should write a book...

I feel like I should make a clever comment, or maybe say something profound. But the truth is I'm really too busy rolling on the floor laughing hysterically.

TJ, I agree with your sister.
*snort, giggle*

Yes, I'm still shaking my head over this one.