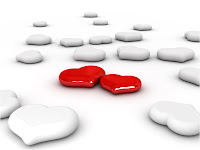 Today IMHO welcomes a "double-header" of smart people, Courtney Milan, debut historical romance author, and Rob Preece, former Golden Heart Finalist and PhD, for the first in a series of pre-Valentine’s day posts with the theme of “Why Smart Women (and Men) Read Romance.” I've asked each guest to give me a little bio which displays their smartness for all and sundry to see. As you might expect, smart people are not only sexy, but modest, so that was harder than you'd think.

What was not hard was weaseling prizes out of them to give to you, my IMHO readers. I’ll be giving those prizes away each day during the event from February 7 - 13, so be sure to leave a comment to be eligible. (Please see my contest page for eligibility details.) If your name is chosen, you must claim your prize by e-mailing me at tjb @ tjbennett . com (no spaces) by February 14, 2010, or I will award it to someone more worthy. Just kidding. About the worthy part, not about giving away your prize. So be sure to check back to see if you've won, okay? And let your subject line be the name of the prize.

So let's get a conversation going! I'll feed you fun facts about romantic fiction you can bandy around at your next party, and then you can direct your naysayers to this blog to seal the deal.

Naysayer attitude #1: "Nobody I know reads those kinds of books."

Your response (statistics from the Romance Writers of America pressroom): "Well, that can't be true, because Romance Fiction makes up $1.37 billion in sales each year. In 2008, romance was the top performing category on the New York Times, USA Today, and Publishers Weekly best-seller lists. According to one survey, 74.8 million people read at least one romance novel in 2008. So...chances are, if you asked four people if they read romance, and they all denied it, at least one of them was lying!"

Now, on to our guests.

I love authors like you TJ , who stand up for the world of romance. Most importantly though, we live in a country where we HAVE the choice to read what we love. If other do not like it they have the chance to make a choice NOT to read it!