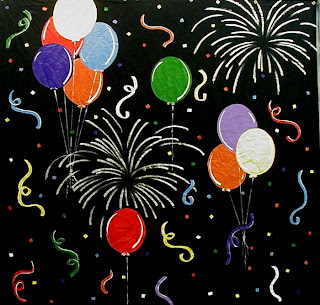 For the month of July, IMHO is changing things up a bit. As many of you who are lovers of romance novels know, the Romance Writers of America® hosts their annual conference in July, and the culmination is the Golden Heart/RITA® awards ceremony on the final night of the conference. The RITAs® are the romance industry’s version of the Oscars and represent the best of published romantic fiction (the Golden Heart represents the best of unpublished romantic fiction). This year’s conference takes place in Washington, D.C. from July 14 – 18.

Sadly, I am unable to attend this year, but I had an idea a couple of months ago. What if I asked the RITA® nominees if they'd be willing to bring a little of the celebration to IMHO? I did, and they were. An astounding number graciously said yes, and as a result, almost fifty RITA®-nominated authors have donated autographed copies of their books (in some cases, two!) and many responded to this question: "What does being nominated for the RITA® this year mean to you?"

So, as a result of their generosity (and a few sleepless nights getting everything ready for you, my wonderful readers), beginning July 1 and culminating on July 17, 2009 (the night before the awards ceremony), I will be giving away ten tote bags stuffed (stuffed, I say!) with autographed RITA®-nominated books to readers of this blog. And, in addition, I’ll even throw in a complimentary copy of one of my own critically acclaimed historical romances with each tote, either The Legacy (my debut novel) or The Promise!

REVISED 6/30/09: To be eligible to win the featured tote, all you have to do is leave a comment each week on any of the posts (the more posts you comment on, the more chance you have of winning). Comment period ends July 18th. You can comment on any and all posts, but you can only win once. I’ll pull the contest winners’ names from all eligible comments (once you’ve won a tote, you are no longer eligible to win prizes for July). I'll announce the tote bag winners every Sunday during the contest period. The winners will have a deadline by which to respond or I’ll have to award the tote to someone else. More details of how to win will be up on my contest page in July. It will be an exciting month, and you never know who might stop in to say hello, so be sure to check in daily to see what's up at IMHO in July.

Just to whet your appetite, here's a picture of the RITA® books in the staging area (a box on the floor of my home office). 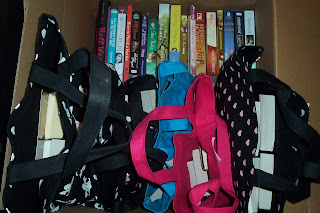 I've already got a bunch of tote bags ready to go, and a lot of books ready to fill up the rest of them. So be sure to get yours by leaving your comments and by giving a shout out to all the amazing, incredible, munificent, and of course, astonishingly attractive authors who so generously donated their books!

So come back this Wednesday, July 1, 2009, and we will get this party started!

(Note: This contest is neither endorsed, affiliated with, nor sponsored by Romance Writers of America®)
Posted by TJ Bennett at 12:02 AM

TJ, sounds like a lot of work but also a lot of fun. Thanks so much for a chance to win.

I'm so excited for this and can't thank you enough for taking the time to do this for us readers!

Wow! I'm looking forward to this!

Thanks, ladies! I'm all a-twitter and not sure how I'll top this one. LOL!

Wow, TJ, this is wonderful!

What a wonderful thing to do. The RITA conference is only 7 hours away, but I can't get the time off. Summer Reading is not the time for a children's librarian to take off. I am sure you have some wonderful books and your two are at the top of the list.

Thanks for the great contest. I can't wait.

Gee TJ, you really do so much for your readers :) Thanks so much for giving us the opportunity to win one of these fabulous totes. What a great thing to do.
It also gives us a chance to meet so many wonderful Authors here. Thank you
Carol L.
Lucky4750@aol.com

Great idea, TJ, you come up with some really good contests, and give us a chance to also find more authors to add to our never-ending wishlists.

What a fabulous giveaway! I'm off to look at the list of books that were nominated.

What a wonderful contest! Have a happy July.

please enter me for one of your great totes.

Wow, Rita nominated books? Wow cool is that? I really hope it's international, is it?

What a wonderful contest. I can't go to RITA either, but this looks like the next to the best thing :)!!

Violetcrush, sorry to say the contest isn't international (you can check my contest page on my website for more details). US and Canada only. I wish I could afford to send the totes overseas, but I'm just a poor, underpaid writer. I sent some bookmarks as promo to Austrailia once, and it cost me almost $20! Can't imagine what sending a tote bag full of RITA books would cost. Yikes!

If you have a stateside or Canadian address that I could send it to, and a generous sugar daddy there who will forward it on, I'd be happy to mail it to you there. :-) Should you win one, of course.

Thanks for the awesome contest.

damn...no issues, thanks for letting me know. 20$ is a little too much just for bookmarks

What a fun giveaway! You've got your work cut out for you.

Please count me in - Thanks,
megalon22 at yahoo dot com

What a fantastic give-away! Can't wait to see who wins and to reading some great books!

Hello love your website very interesting. possibly getting Rita is great and not suprised you are enthused. I read Mulberry Park and it is very good read.
Thanks for all the contests and please enter me in any you have this month. Good luck on rita and your writing. GLoria

Thanks so much for offering us a chance to win!

You're welcome, Anonymous, but be sure to put a name on your posts if you want a chance to win. There might be more than one Anonymous participating, and I'd hate to have you two fight it out for the win...

n the other hand, that might be hugely entertaining for the rest of us...

This is a great contest. I read a lot and would so love to win. Thanks for the contest.

These are great books!

What a great contest. I was lucky enough to go to the RWA in Dallas two years ago. My friend and I had a blast. Romance authors are the nicest people!! Thanks for the chance to win.

I just left an anonymous post. I'm leaving another post with my name on it. Thanks again for the chance to win!

Would love to win! Thanks.

What a wonderful blog and not just because of the giveaway! Thanks.

I love contests, hope to win this one.

reading is my passion, thanks

I need an adult 'reading break'! I have babies at home and I am in my forties!

i'd be thrilled to win a tote- all of these books sound like fabulous reading- am especially looking forward to susan wigg's newest lakeshore book.

hm.. catharine's blog is a blog that one of my student's writes. not sure why that showed up as my name..lol

What an awesome idea!!!

Good Luck to all the Rita Nominees

I'm not at the conference this year, either, but what a fabulous idea. I always covet all the RITA nominees -- and hope the GH ones get published soon!

Thank you so much for the contest.
Debby Creager
cleo@hbeark.com

What a great contest/giveaway!!! I would loooove to win!!

Thank you to all the authors who participated in this! Wish me luck!

This is a wonderful thing that you are doing. Keep up the great work

wonderful reading, wonderful awards, and wonderful writers. . .what more can we ask?

What a nice thing to do !

Thanks to Susan Wiggs for leading me here.