My new cover for THE PROMISE! 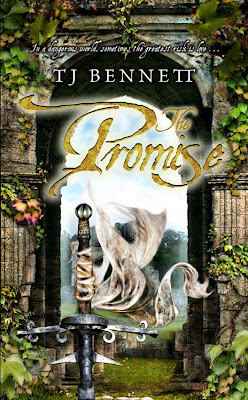 Thought you folks might like a sneak peek of my cover for my next historical romance, The Promise. Isn't it lovely? This one is a connected book with The Legacy in that it is about the middle Behaim brother, but instead of Germany, it takes place in the Italian city states of Pavia and Genoa. The book is scheduled for release in another year, May 2009 (yes, it seems like FOREVER). Here's the back cover copy on it and some (very) early reviews:

In a dangerous world, sometimes the greatest risk is love ...

In 1525, Günter Behaim is a Landsknecht (a professional soldier in the service of Emperor Charles V). Günter has been betrayed by love and promises not kept. As a result, he has sworn to make few promises of his own and keep those unto death. However, when his friend is mortally wounded while saving Günter’s life, he gives a pledge to marry his betrothed. To keep his promise, Günter must use every weapon in his romantic arsenal to convince the reluctant woman to marry him. As his passion for her grows, he realizes he is falling in love. Is he prepared to risk his worst fear: having his heart rejected once more?

The Spanish beauty Alonsa García de Aranjuéz is determined to withstand Günter’s relentless pursuit. Haunted by a gypsy’s curse on any man who loves her, Alonsa yearns for Günter, but fear for his safety forces her to rebuff him. As she struggles to deny the growing attraction between them, she begins to realize that fate may have other plans. With danger surrounding them, will Alonsa bite from the forbidden fruit? Or will Günter be bitten instead by the mysterious misfortune that seems to plague any with the courage to become ... Alonsa’s love?

“Lush, sexy and exciting, The Promise offers a fascinating glimpse into a rarely visited age!”
~ Victoria Dahl, author of To Tempt a Scotsman and A Rake’s Guide to Pleasure

“A delightful breath of fresh air in historical romance! With a unique setting and memorable characters, TJ Bennett delivers a gripping romantic adventure that will leave you breathless for more.”
~ Monica McCarty, New York Times Bestselling Author of Highlander Unchained

“A romantic adventure with a devastating hero that you’re sure to love. T.J. Bennett’s The Promise is a breath of fresh air in the Regency-heavy historical market.”
~ Kahlen Hughes, Romantic Times Reviewer’s Choice Nominee; author of Lord Sin and Lord Scandal
Posted by TJ Bennett at 9:21 AM

The book sounds wonderful, and the cover is beautiful, but--(and it's probably just my eyes, which are bad)--what is the swirly scarf thing in the middle? Is there a person in it? Or is it just a flowy cloth? It's still very pretty, but I'm about to give myself a headache trying to figure out if there's a person in there somewhere... Can't wait to read the book, tho.

Thanks, Kim, Kimber, Delilah, and Trish for stopping by and complimenting my cover.

Gail, I have to admit, I wondered the same thing when I first saw it! LOL! However, the scarf is supposed to be Spanish lace, I think. I suggested to the art department that they include a mercenary's sword on the cover for my hero, and a mantilla or Spanish lace scarf for my heroine (who is a Spanish blade merchant's daughter) to balance the very masculine scarf. This was their rendition. I think it is haunting and evocative. If you click on the image, you can see a larger picture of it and you'll see the designs in the scarf a bit better. I actuallly expected if they chose the scarf route for them to do something black, since my heroine is in mourning, but I like this, too.

"to balance the very masculine scarf"

Wow, TJ, that is a very lovely cover! Thanks for sharing the peek!

I adore that cover, TJ. They did a beautiful job of making it different, yet the same as THE LEGACY's cover. Bravo!

Wow! Can't believe I'm so late coming to the party. Been writing up a storm *grin* you know how that is.
That is one gorgeous cover, T.J.
Medallion is a class act.